Books and films thought to ‘emphasise matters of sex, horror, violence or crime’ were banned or censored by customs officials.

When a film reel arrived in port, a customs officer would view it. If anything was too salacious or ‘likely to encourage depravity,’ the officer would cut the scene out of the film and tape the reel back together. The reel would then be measured and customs duty was applied to the remaining length.

Notorious for its descriptions of sex, Lady Chatterley’s Lover was banned in Britain and Australia in 1928.

Over the following decades, customs approved various censored editions of the book. In 1960 Penguin won a much-publicised British court case and the ban was lifted in the UK – the book became a best seller.

Yet the Australian ban remained. 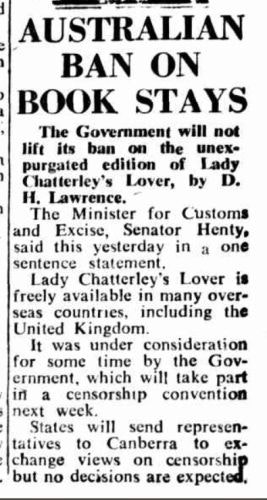 “The Australian government decided against the advice of its expert advisory committee that Australians do not have as mature minds as the people of Britain and therefore must not read the novel.”1

The Australian ban was lifted in 1965 when a copy was smuggled into Australia and published widely. Bans on Nabokov’s Lolita and Brendan Behan’s Borstal Boy were also lifted. It was the end of an era – the Commonwealth could no longer regulate morality.

Today, Lady Chatterley’s Lover can be borrowed from the Customs House Library. Its contents barely raise an eyebrow.